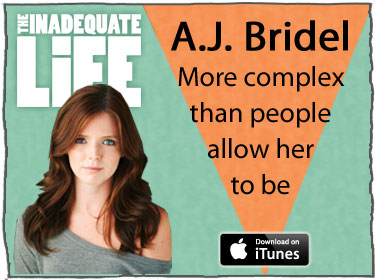 Asked about playing the role of Dorothy in the “The Wizard of Oz” A.J. Bridel said “Dorothy is more complex than people allow her to be.”

After spending time with A.J. I can say the same is true of her.

Here’s a link to interview with A.J. Bridel done just after the opening of “Kinky Boots” during Toronto’s Pride Week.

A.J. graduated from Eastwood Collegiate in Kitchener as an “A” student, starring in the school play, but 2 years earlier, while working through her parent’s separation and lashing out, she had been kicked out of the school play because of her inability to focus and collaborate.

With the help of friends and family A.J. managed to get back on track by focusing on theatre and her school work.

Nothing is as it appears

In the interview A.J. cites Jennifer Hudson as someone she admires for pursuing her dream despite the odds of succeeding in showbizz. Remember, it was Simon Cowell who told Hudson, on American Idol, that she was “out of your depth in this competition.” Cowell later admitted he was mistaken.

In 2012 Bridel competed on the CBC TV reality talent competition “Over The Rainbow.” She finished in third place and we discuss the behind the scenes process of reality TV where nothing is as it appears.

A clip from her appearance on “Over the Rainbow” featuring Andrew Lloyd Webber.