Kahlil Ashanti is an accomplished performer and an innovative app designer. He also served in the United States Air Force where he was a company member with the legendary performance ensemble Tops in Blue.

In this episode, we discuss the tool he created to help performers grow the revenue: WeShowUp.io

WeShowUp.io is a fantastic app, with many uses, one of which provides a platform for artists to entice new audiences to book a spot for a performance and then, after the performance, make a digital payment. This eliminates the sticker shock of a high ticket price, thus providing a low-cost entry point for discovering a performer’s work.

Prior to writing computer code, Ashanti created and performed the solo show “Basic Training,” which went from the Montreal Fringe Festival to a sold-out run at the Edinburgh Fringe and off-Broadway. The show won many awards including a NY Times Critics Pick and the Scotsman Fringe First Award.

Ashanti appears in “The Tick” on Amazon Prime and season 15 of ‘Supernatural” on The CW.

WeShowUp.io, is a digital solution that, long before the pandemic, was being used by theatres around the world. Now, as digital events have become the norm, weshowup.io can help you grow your audience and increase revenue.

Dan Chameroy is one of Canada’s most exciting and versatile actors.

Born in Edmonton, Alberta, Dan is currently appearing in Covid19: The Pandemic (at home).

Prior to social distancing and self-isolation he could be seen on stages and screens across North America. His Toronto stage debut came in the 1991 production of “Les Miserables” at The Royal Alexandra Theatre. He’s also performed for 13 seasons with the Stratford Festival.

Chameroy is nominated for a 2020 Canadian Screen Award in the category Best Lead Performance, TV Movie for his role as Plumbum in “A Christmas Carol: The Family Musical with a Scrooge Loose!” which is the filmed version of Ross Petty’s annual holiday musical in Toronto. 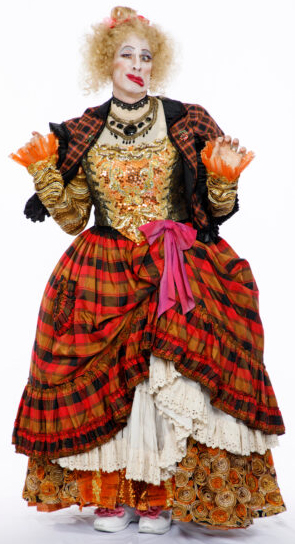 Dan Chameroy as Plumbum
Previously Chameroy has received three Canadian Screen Award nominations for his performances in the animated series “Hotel Transylvania” and “Oh No! It’s an Alien Invasion.”

Chameroy’s portrayal of Miss Trunchbull, in the North American Tour of “Matilda the Musical,” received glowing reviews including this line from Robert Cushman in the National Post: “Chameroy’s triumph is to be chilling but delicate.” In the Orlando Sentinel Matthew J. Palm wrote that Chameroy delivered “a mesmerizing performance and the highlight of the show.”

Chameroy performed in the 2014 production of Stephen Sondhiem’s “Company” directed by Gary Griffin with a cast that included Brent Carver, Louise Pitre, Nia Vardalos and may other Canadian theatre luminaries.

Write your questions for Dan below, in the comment box, and then listen next week for the podcast episode.

Record a question on your mobile phone – it’s easy – click this link for details.

Be sure to subscribe on iTunes and Apple Podcasts and you’ll never miss an episode.