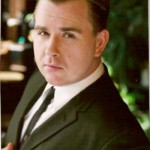 I first met Dave Martin in 1997 when he was doing a character named “Glue Guy.” It was an edgy bit that helped propel him into the ranks of a comedian’s comedian.

These days he performs across Canada and hosts the “Guilty Pleasures” podcast. Prior to that he co-hosted “Anything Goes” with Daren Frost on SiriusXM.

Dave has performed at the Just For Laughs festival and on CBC Radio’s The Debaters.

We discuss, among other things, preparing for a dream gig at Massey Hall, the comedians who helped him hone his act and finding love online.