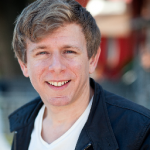 J. Kelly Nestruck is a journalist and theatre critic with Canada’s top national newspaper The Globe and Mail. He’s a winner of the Nathan Cohen Award for Excellence in Critical Writing.

Kelly’s a well read, thoughtful critic, often his writing inspires me to connect on a deeper level with the artists’ whose work he’s reviewing.

He talks about growing up in the politically charged city of Montreal and studying theatre at McGill University.

Listen and find out about the jobs he had in his path to becoming an arts journalist and how social media has changed the relationship between artists, their audience and theatre critics. We talk about the time playwright, actor, and director Morris Panych responded publicly to one of Nestruck’s critical reviews.