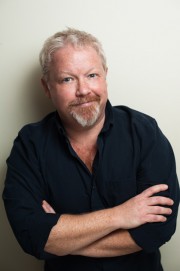 Mark A. Rayner is an award-winning writer of satirical and speculative fiction.

Mark and I first met a few years ago at Western University Canada where we both teach.

Mark has written 3 novels, several plays and 2 collections of short stories. His most recent novel, “The Fridgularity” won the 2012 IndieReader Discovery Award for Best Humor.

We discuss how Mark’s experiences as a journalist made him realize he prefers writing fiction to daily reporting. In the past Mark struggled with his weight and he candidly discuss confronting such a personal issue in his writing. Mark also shares his experiences with publishers and self-publishing. 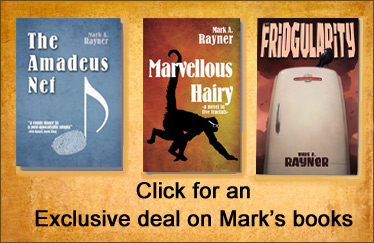 An accomplished actor, Steve Ross has performed at The Stratford Festival for 11 years. In 2014 he played Sancho Panza in “Man of La Mancha” and Moose in “Crazy for You.”

Currently Steve can be seen as Shrek at The Grand Theatre in London, On. where he plays the lead role. Towards the end of the podcast Steve discusses how he prepared for the role.

Steve’s performed at a variety of theatres including Chicago Shakespeare theatre, The Canadian Stage and the Neptune Theatre.

But Steve began acting later in life, after dropping out of Western University, and Sheridan College’s sports medicine programs. He would study at Brock University and the National Theatre School of Canada before finally choosing a life on the stage.

We discuss Steve’s love of comedy, his most bizarre audition for a TV commercial and the time he failed in the role of Edgar in “King Lear.”

Steve was an actor on the verbatim theatre piece “London Road” at the Canadian Stage. We discuss how it felt rehearsing with an ear piece….listening to the real voice of the character he played, in his ear.

We also talk about his mother, who suffered from depression, and the impact that had on his acting.